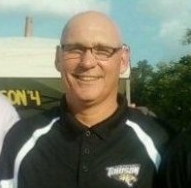 Football fans in Baltimore can’t seem to escape the natural rivalry with our neighbors north of the Mason-Dixon Line. The Mariners were faced with their first true litmus test last Saturday as they narrowly defeated the York Capitals 40-31. The Caps presented numerous challenges for the Mariner offense, but Coach Ron Meehan’s squad answered the bell. Overcoming a 13-0 deficit, the boys in blue regained the focus that coach constantly preaches in the second half. At 3-0, the Baltimore Mariners continue to set the pace as the only undefeated team in the AIF. Here’s what Coach Meehan had to say as his team prepares for the second leg of a home and home series against the rival York Capitals Friday night.

Q: To steal a line from Dennis Green, are the Capitals “Who you thought they were”?

A: “Yes, they are. We knew they were going to be improved from when we scouted them earlier in the season. They brought in some guys and bolstered their D-Line, which presented some problems. We like to think this is a growing rivalry since about an hour separates us up I83. We didn’t show them all five cards in our hand last week, so we have more to bring out Friday night.”

Q: When facing a rival in a hostile atmosphere, how do you manage to keep the overall composure of the team?

A: “I always tell our guys that ‘it’s about us and not about them. It’s just noise. The Mariners are the only team that can beat the Mariners.’, When we finally took the lead, I brought the guys together to let them know that now it’s their turn (York) to press. In a game without Cipra (DNP-Coach’s Decision), we wound up converting on all 2-point conversions which gave us 10 points in a game decided by nine.”

Q: Can you assess QB Kevin Clancy’s performance against his former team?

A: “Well, field position and play selection didn’t do Kevin any favors early on. As a team, we had never played from behind, so there was adversity we had to overcome. He was pressing a bit because of the flow of the game and I do think he felt there was something to prove. Once he settled into the game, he carried us like the leader he is. The game flow changed and we were able to run our offense.”

Q: Despite the loss of Daijeon Powell, how is RB Matthew Winger getting acclimated to the offense?

A: “This was Matthew’s first indoor game of his career, so naturally there’s a learning curve. The team welcomed him with open arms. He’s a coach himself at the high school level, so he’s very coachable. One thing that impressed me was his hands out of the backfield. York has some beef on the defensive line, so the holes just weren’t there. We’ll have to make adjustments to best utilize his skill set.”

Q: Joe Taylor’s defense is allowing 25 points per game, which is absurd in arena football? How proud are you of your staff and the player-personnel?

A: “It’s amazing, isn’t it? If you look at the history of the Mariners and Baltimore football at large, we always hang our hat on the play of our defense. The secondary is really coming together the more and more they play together. Against York, we had an injury to Andre Letran, so we asked Ray Mack to fill in at DB and he did a tremendous job breaking up a couple passes. Mack is just the type of guy to build your team around. Everything he does on and off the field and in the community. We’re thrilled to have him.”

Q: How excited are you and the boys to come back home to the raucous crowd and defend your turf?

A: “We went on the road in a hostile environment and took care of business. Right now, we have a target on our back. We’re coming home with a 3-0 record and are very excited to play in front of our crowd. I’m excited to get JR (Cipra) back which gives us a big lift in the kicking game where we know we have an advantage. The players love being home. The majority of this team is comprised of local guys who can’t wait to play for their families and friends. We’re hoping everyone brings mom out to Friday’s game for an early Mother’s Day gift.”