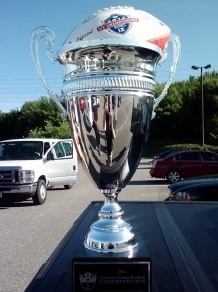 Fayetteville, NC – It was predicted that defensive back Richard Johnson’s timely return after a month-long battle with hamstring issues would give the Baltimore Mariners a lift in their quest for a championship. Nobody suspected his most significant contributions would come on the offensive side of the ball. Johnson, filling in for starting quarterback Kevin Clancy and second stringer Kevin Ford who both exited the game with injuries, connected with veteran wide receiver Aaron Yarbough for a game winning touchdown as time expired in Saturday’s American Indoor Football championship. The Mariners defeated the top seeded Cape Fear Heroes 45-44, clinching the city’s first professional indoor championship since 2010.

It’s clear that the players representing Cape Fear were not the only ‘heroes’ in the building. With an inspiring performance, the Baltimore Mariners fought back to erase an 18 point deficit with nine minutes remaining in the fourth quarter. The team’s resilience was on display all evening as players dropped like flies one by one. The injuries mounted to the point where we almost saw as much of the Mariner training staff on the field as we did the players. In the end, the bumps and bruises proved to be a small sacrifice.

The Heroes got off to a fast start, scoring on their first play from scrimmage, and then returning a short Mariner field goal attempt for touchdown. After spotting Cape Fear a 12-0 lead, Baltimore settled in as Kevin Clancy tossed a touchdown pass to wide receiver Anthony Green, narrowing the gap to 12-6. Clancy’s ‘refuse to lose’ mentality was obvious as he fired laser after laser with the occasional soft touch pass mixed in. The Mariners’ gunslinger consistently eluded the pass rush for the first quarter and a half before a nagging rib injury forced him to the sidelines. Clancy returned for the second half, but was driven into the turf on his first drop back, reinjuring his ribs and ending his night.

The Mariners managed to crawl back into the game, taking a 19-18 lead with six minutes to play in the second quarter after a safety by Thomas Potts and a field goal from JR Cipra. Cape Fear delivered the next blow and carried a 24-19 lead into halftime. Baltimore coach Ron Meehan, who was fired up over several calls in the first half, had the responsibility of keeping his team’s collective spirit up after numerous tough breaks. As we witnessed all season long, the character and resolve of this football team found a way to persevere in dire circumstances.

As Clancy’s ribs were being treated, second string quarterback Kevin Ford filled in admirably. Ford found team captain Ray Mack in the end zone, giving the Mariners the lead 26-24 mid way through the third quarter. That lead was short-lived as Cape Fear quarterback Steve Adams showed off his big arm for a long touchdown pass just before the end of the third quarter. The Heroes built a 44-26 lead with about nine minutes to play. The home crowd began to celebrate as they could virtually taste the champagne. Not so fast!

In sports, it’s often said that sometimes the ball has to bounce your way. That’s precisely what began happening for the Baltimore Mariners. Rookie defensive back, Matt Hnatiuk has been a pleasant surprise this season and he made arguably the biggest play of the year. While breaking up a long pass, the football deflected off the dasher pad and wound up in Hnatiuk’s grasp. The rookie has never run faster in his life as he returned the interception for a touchdown, cutting the Heroes’ lead to 44-39. Hnatiuk’s touchdown proved to be the much needed shot of adrenaline for a team whose season was on life support.

The game was literally in the hands of the Mariner defense when you factor in Richard Johnson’s role as emergency quarterback. With just over a minute to play, Johnson led a drive that resulted in an interception in the end zone with only 31 ticks left on the clock. Defensive Coordinator Joe Taylor’s Boom Squad dominated all season long, but was asked to make one last big stop. And I mean BIG STOP. Defensive lineman Shaquane Madison flexed some serious muscle, smothering the Heroes’ for multiple no gains which stops the clock in the indoor game. Miraculously, Cape Fear was unable to kill the clock and turned the ball over on downs as 11 seconds remained.

A recurring theme of the game was injuries on the Mariner side of the ball, none as severe as the loss of Baltimore wide receiver Anthony Green. On the first play from the Cape Fear 11 yard line, Richard Johnson lofted a pass in the back corner of the end zone, intended for Green. As Green leapt to make the catch, he was forced out of bounds by a Heroes’ defender. Both players flew over the dasher boards, landing on the concrete. It was a scary moment as the capacity crowd remained silent while medics worked to stabilize the courageous wide receiver. The game was delayed well over 20 minutes as Green was taken to a nearby hospital. Fortunately, his injuries were non-life threatening and is expected to make a full recovery.

The saying is the same in Sports Theater – ‘the show must go on’. While the medical staff was taking care of the fallen warrior, Coach Meehan and his staff dialed up a play that will live on in the history of Baltimore sports. With two seconds remaining, Johnson stood in shotgun formation for what everyone knew to be the last play of the season. In a fitting turn of events, the converted quarterback found his old friend Yarbough who had a step on a defender. When the referee’s arms went straight up signaling touchdown, it was confirmed that this was in fact a team of destiny.

Fans remember how both Johnson and Yarbough won a title with the Mariners in 2010 which only added to the dramatic storyline. The on-field celebration ensued as Coach Meehan received the customary Gatorade shower. AIF commissioner, John Morris presented Meehan with the championship hardware. A Beaming Ron Meehan gave many thanks to his players for never giving up and believing in his message.

This group of men deserves to be celebrated in the community. They’re officially champions. More than anything, they’re terrific human beings. As the celebrations subsided, the team refused to leave Fayetteville until they brought the cup to their wounded teammate. Green, who was being treated at a local hospital, may not have been there to celebrate but he certainly wasn’t forgotten. The next stop was bringing that championship trophy back to the city of Baltimore.

Congratulations to the 2014 Baltimore Mariners on your championship season! We’re proud of you and can’t wait to see the banner raised at next year’s home opener!